To begin with, these Healthy Baked Cinnamon Sugar Doughnuts are grain-free and low in sugar. Also, the doughnuts are so easy to make. You only need 7 ingredients including almond flour, baking powder, cinnamon, eggs, maple syrup, olive oil and coconut sugar. Lastly, your house will smell incredible when you bake these doughnuts!

Did you make them yet?

Check out THIS almond flour I use. $13 for a GIANT bag!

THESE doughnut pans are awesome.

TRY OUT THESE OTHER FALL BAKING RECIPES! 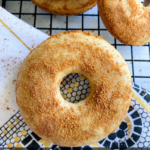 Did you try this recipe?

Let me know in the comments with a comment and rating! 🙂 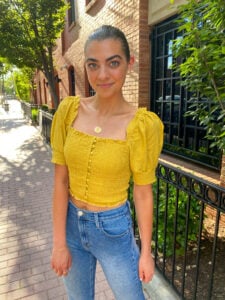 Hello and thanks for visiting my page! My name is Krista. I enjoy creating healthy recipes, motivating others and spreading sunshine wherever I go. I love food! I always have ever since I was a little girl. Read More About Me…

Sign up and be the first to know about new recipes, posts, events, discount codes & more!

Did you make em yet?? 🎃 Pumpkin Oatmeal Breakf

Chewy, Sweet and Chocolaty… What more could you

Do you have a ripe banana on your counter?🍌 Thi

Crispy Spiced Chickpeas - You can bake em or you c

New Addition to my Routine! 🚨I have been incor

Who’s into a sweet/salty mix!? Chocolate and sal

Important Message 🚨 Over the past year working

Dairy-Free Mac & Cheese: Made without cheese and c

Can I tell you a secret?… It took me less than 1

Are you ready for all things pumpkin!? 🎃 . Heal

Who else can’t go a day without chocolate!? I ha

Are you a snacker? I don’t think there’s a day

Any cookies that may not be particularly necessary for the website to function and is used specifically to collect user personal data via analytics, ads, other embedded contents are termed as non-necessary cookies. It is mandatory to procure user consent prior to running these cookies on your website.